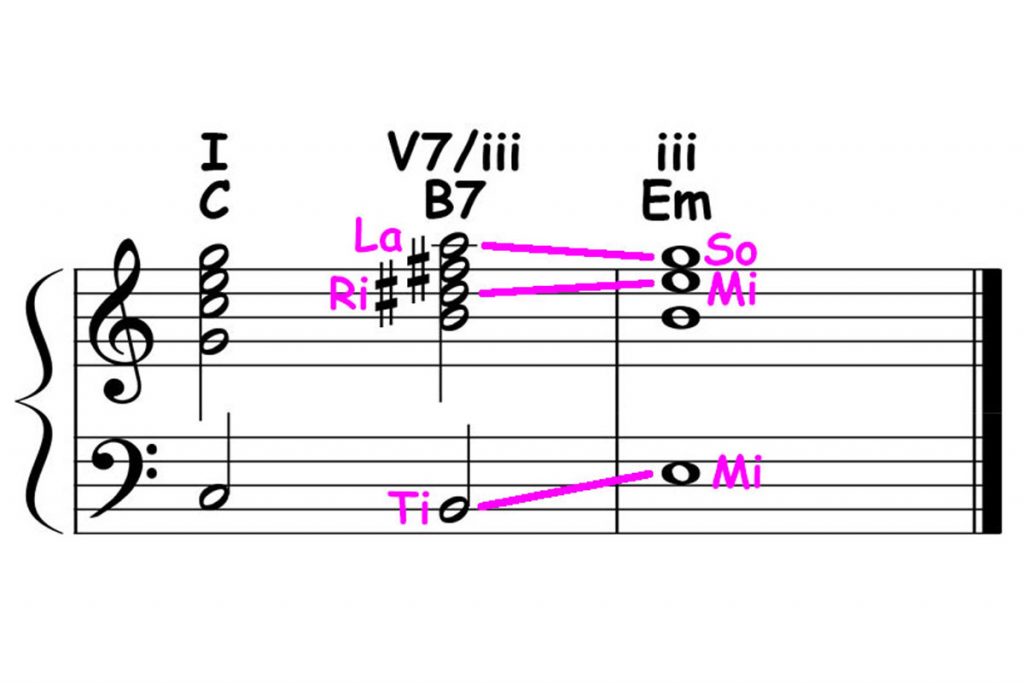 This is a such powerful chord progression because the G7 chord (V7) creates a very strong (dominant) harmonic tension, which is resolved with the return back to the C chord (I). This tension comes from three sources:

That said, a similar tension-release formula can be used to approach any diatonic major or minor chord, not just the tonic chord. Doing so required a two-step thought process:

Any of the five diatonic major or minor triads (besides the I) may be “tonicized” by approaching it with its Secondary Dominant. These chords (circled) are Dm (ii), Em (iii), F (IV), G (V), and Am (vi).

Hint: The appearance of Bb (Te) in a major context is an indicator that a V7/IV may be occurring.

Note: As you play each secondary dominant progression, notice the tension and sense of direction and harmonic pull that is created when the secondary dominant chord appears. In some cases, it is so strong that it can be used to create a new key center based on the tonicized chord.

Hint: The appearance of F# (Fi) in a major context is an indicator that a V7/V may be occurring.

Hint: The appearance of C# (Di) in a major context is an indicator that a V7/ii may be occurring.

Secondary Dominant of Am (V7/vi)

Hint: The appearance of G# (Si) in a major context is an indicator that a V7/vi may be occurring.

Hint: The appearance of D# (Ri) & F# (Fi) in a major context is an indicator that a V7/iii may be occurring.

Note: With a little experience, you will start to recognize secondary dominants by sight and sound. Don’t fuss over the details right now. For the moment, it’s enough to understand the concept of extending harmony using Secondary Dominants.